After my wreck, it's been months since I was able to do even the most menial of chores and tasks around the house and the TA suffered some for it.  With the '91 Corvette in the shop getting a complete front to back checkout, an oil leak fixed, and a vacuum leak fixed (the AC only blows through the defroster vents no matter what setting), it was time to take the '86 TA out of the garage, blow the soot off of her and put some miles on her rubber.

About the second day that I drove her I noticed that the driver's side fog light had burned out and with the weather being pretty bad for a while I wasn't able to ramp the TA up and slide under it to work on it.

One thing I always hated was seeing one of these cars (post '85) with one of the driving lights burned out ... so until I fixed mine I just cut the other driving light off.  I could fix it, no problem, even had a spare bulb in the rolling tool kit ... but I just didn't have the time or the energy.

Today, I felt like doing that and that's what I did so ... twenty minutes worth of work under the TA and I've banished the one eyed fog light monster again ... hopefully for another 29 years.

Now it's back to normal and I can run in the early morning hours without the headlights up killing my gas mileage. 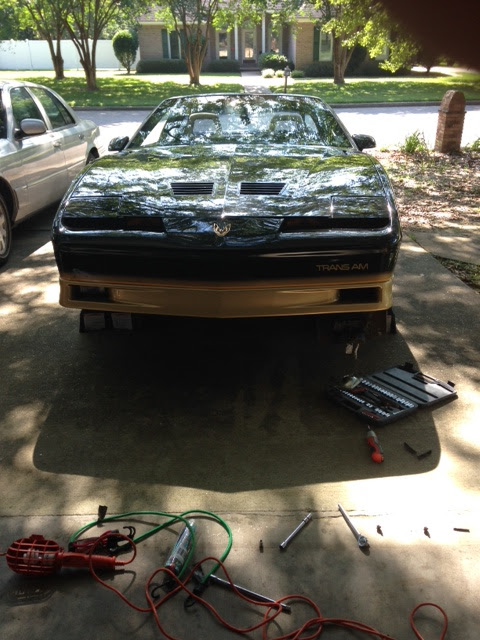 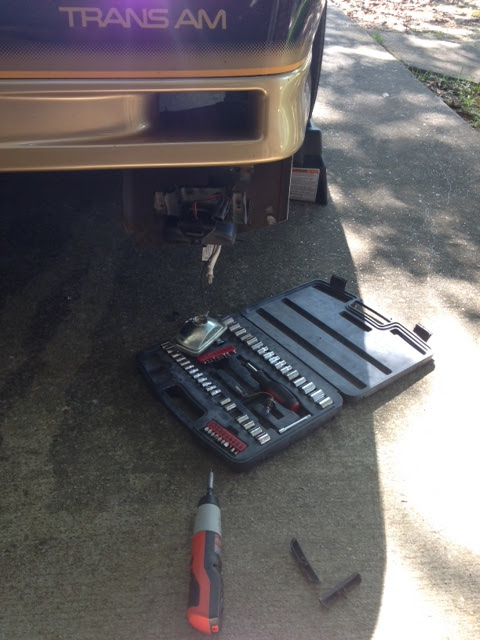 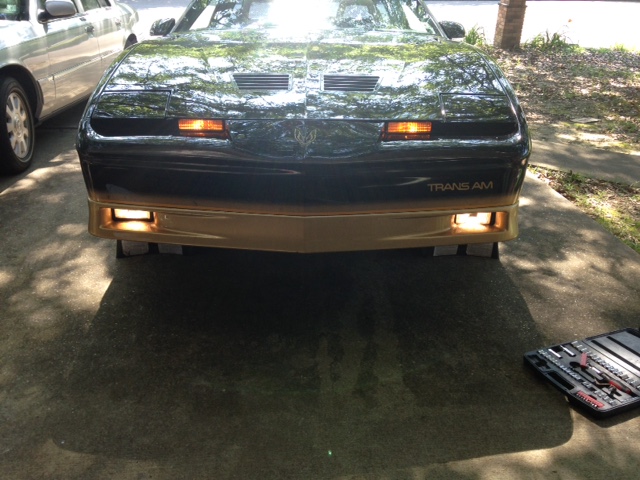 On the day after Memorial Day, I put my '91 Corvette in the shop to fix a few problems on it and took the '86 TA back on the road as my temporary daily driver.  She did fine for a week and a half then on the way home the blower in the dash went out.  There is nothing like driving along with the windows up, the sun beating down on you through the glass T-tops on a hot day, the AC cranked to MAX and the blower set to HIGH and then to just have nothing coming out the vents in the dash.

I tried the switch a few times (because when something stops working at 65mph in cruise control that's what you do) and ... nothing.  The compressor was kicking over and cold air was leaking slowly out the dash but there was no wind coming from the dash which meant that the blower motor in the dash had just given up the ghost or something had come loose or a fuse had blown.

I got home, checked the fuse and the fuse was good.  I ghosted a few threads and found that the solution was either a bad blower motor or a bad electrical connection of incredibly poor OEM design.  I wasn't too upset ... if that poorly designed electrical connection had given up the spirit after 29 years of faithful service I didn't have too much to complain about.  Since I was getting nothing at the fan motor I decided to replace that first (being 29 years old and such).  I went to Advanced Auto Parts and got a new motor.  The counter guy asked me if I wanted one with the fan cage or without.  I initially told him without, thinking I would just reuse my fan cage but then I told him to give me the one with the cage since ... again, 29 years old, I wasn't sure that if I got the original fan cage off the original fan motor if it wouldn't just disintegrate or come apart at a later time (old part hooked to a new part) so I erred on the side of caution.

The blower motor and hamster cage is located in the firewall on the passenger side of the under hood area.  It's secured by five bolts,

I got back home, the TA was still on ramps, and I swapped out the blower motor.  It's not that hard ... in fact, the lower two bolts will cause you to use four letter words in combinations that would make Jesus weep openly if He was helping you swing wrenches on this problem.  Those two bolts will come out, it just takes a lot of time to get those two lower bolts out. 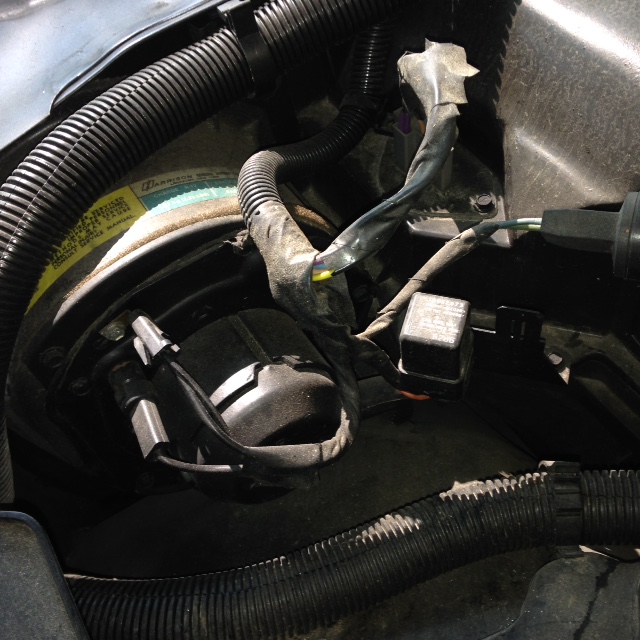 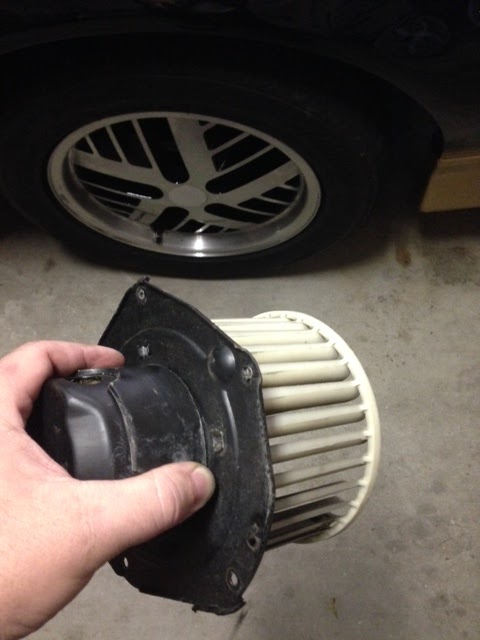 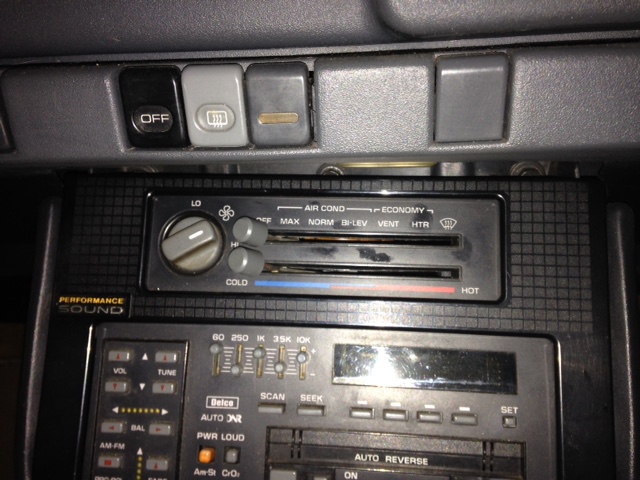 Three out of four speeds is still better than none ... especially in a Mississippi summer.  Not having AC in Mississippi in the summer is akin to committing suicide. 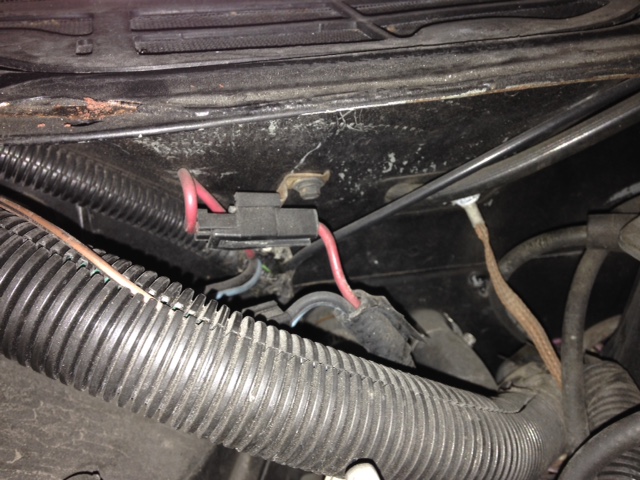 Now I've got to replace one of two (or maybe both) electrical connections (one under the hood near the passenger side valve cover / firewall) and one under the driver's side dash.   That's the connection under the hood, look for the dipstick for the automatic transmission and it's pretty much in a direct line straight back to the firewall.  Replacing it isn't hard to do ... what's going to be hard to do on the inside / under dash connector is finding it and working on it since after my accident I'm still kind of gimped up.  What I hope to do is swap out the underhood connector first and if that fixes the high speed fan setting then I'm not going to worry about the under driver's side dash connection until it fails ... but like I said, I'm still recovering from my wreck and right now I'm happy with 3/4 fan speed and cold air again, especially in a Mississippi summer ... maybe tonight or tomorrow night I'll replace the connector under the hood and if that still doesn't give me high speed fan mode I'll just bite the bullet and track down the one under the driver's side dash.

Oh, and just to add extra grief flavored icing to the cupcake of life, the left side of the driver's Recaro started splitting.  I had the left side bolster replaced about a year ago.
I guess the 29 year old material is just wearing thin. 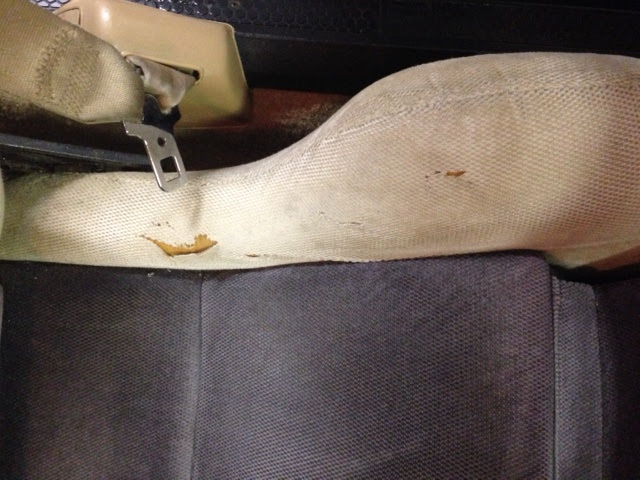 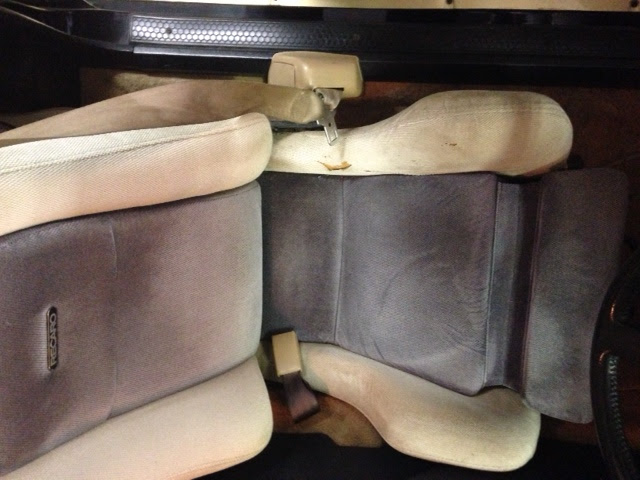