I received a second OEM T-top bag, black, from a guy on Ebay who was parting out his black GTA.  The bag is mint but doesn't have the "GM" logo stamped into it like my original bag does.  I'm going to put my original bag up for storage and use this spare bag when I need to.
Posted by Christopher T. Shields at 9:47 PM No comments:

Well, son of a witch!

Look at THIS bit of unexpected good fortune!


I was going back through the RPO codes and look what I found.  My "monochrome" TA isn't a monochrome TA at all, but an original, black and gold two-tone TA!  Words cannot describe the ecstasy I am feeling at this instant in time.  I wanted a black and gold WS6 optioned TA, I settled for a monochrome black Y99 optioned TA.  Then I discover that the TA actually is a WS6 car and is wearing the wrong wheels and tires.  Now I discover that the TA was originally a black and gold TA and one of the previous owners painted the gold rocker panels black (and removed the "TRANS AM" name on the front, the square-dot-fade stripe around the car and the "PONTAC" emblem from the front driver's side headlight.  I guess they were trying to "build" a GTA (which didn't appear until 1987).

How's that for luck?

Unbelievable...  I now own, through a very strange set of circumstances, the very car I was looking for in the first place.  Some (re)assembly required.
Posted by Christopher T. Shields at 9:45 PM No comments:

I hit Google and tried to find the last two remaining RPO codes.  I found both the WS1 and the NOD codes after about five minutes worth of searching.

By ordering these three items together (possibly a prelude to the later 1SC groups), the dealer could get these three items at a lower cost than if they were ordered independently.  The NOD RPO code is the designation for the Norwood, Ohio assembly plant where the car was built in 1986.

Cars built in the Van Nuys, California plant received "VAN" to their RPO codes.
Posted by Christopher T. Shields at 9:44 PM No comments:

Mike emailed me with the following missing RPO code from my list of three unknown RPOs.

No N0 (zero) D listed,  (the letter “O” is not used as a second digit) but N04 thru N09 are all for either locking fuel caps or locking fuel filler doors

No WS1 listed, either.


Thanks, brother!
Posted by Christopher T. Shields at 9:43 PM No comments:

I received in the mail the "Feel the Rush" ad along with the February 1985 issue of Popular Hot Rodding detailing the first tests of the (then) new 1985 IROC-Z vs the 1985 Trans Am. 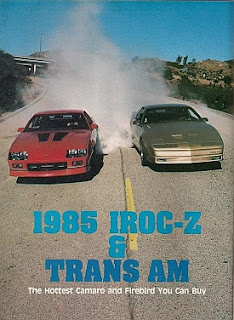 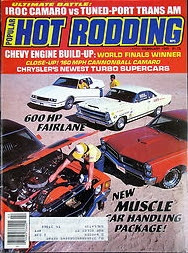 Flipping through this old magazine takes me back to 1985 ... I was a junior in high school when these cars were brand new and yes, I had this magazine as part of a subscription.  I threw away most of my old car magazines right before I got married, making room in my life, and I have regretted it ever since.  I had most of the mid to late 1980's covered for Car Craft, Hot Rod, Popular Hot Rodding and others like High Performance Pontiac and Super Chevy.
Posted by Christopher T. Shields at 9:23 PM No comments:

I found these two ancient brochures online at McLellan's Automotive.  Communication and shipping were friendly and super quick, I highly recommend these people if you need an old brochure or other type of literature for your car. 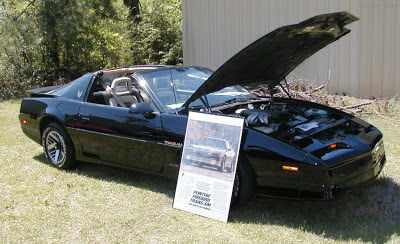 I enter the '86 TA in a local car show.  I'm late so I miss the judging and any awards given out but the car meets with a lot of awe for its condition and seems to attract a fair sized crowd from time to time.  I spend most of my time there answering questions about how I got the car and on the third gen Firebirds in general.  The only other Pontiacs at the show are a golden green '68 GTO, '76 red Trans Am (though it has a clock in the dash where the tach should be and it is sporting 1979 gold decals instead of the correct 1976 decals so I can't verify its authenticity) and a super sweet old red Lemans convertible that I would love to own.

I join the club that is putting on the car show, The Cool Cruisers of South Mississippi, and am invited back that night to the monthly cruise-in at the Sonic in Oak Grove, MS.  I've been hanging out there with the club for months now with my father and his '55 Oldsmobile so they know me.  During the car show, I make several contacts and begin to track down a local powder coater out of Columbia.  I am also invited to two more shows in the next few weeks, a show for the local armed forces personnel at Camp Shelby (April 22) and a car and bike show in Collins, MS in the first few weeks of May.  The cruise-in at Sonic is shorter than most due to the car show that very day but the TA still draws a small crowd from time to time with a follow-up Q&A session when someone in the club points the crowd over to where I'm sitting.
Posted by Christopher T. Shields at 9:06 PM 2 comments:

"FEEL THE RUSH"
Canadian 1985 magazine advertisement
for black and gold Trans Am
Posted by Christopher T. Shields at 9:03 PM No comments:

The '89 Formula 350 is sold for $2500 cash.  I manage to snatch a few extra magazine ads and dealer albums, brochures off of Ebay.
Posted by Christopher T. Shields at 9:00 PM No comments:

Well, the TA didn't make it to the local show because I had 30 hours without sleep under my belt and needed to put a pillow under my head.  My dad made the show with his '55 Oldsmobile but he didn't win anything.  The show wasn't very well organized, no categories so my TA wouldn't have stood a chance against the fully restored '50's Studebaker which won.  There were only two prizes, first and second place.  The show redefined the term "rinky-dink."  It was also claimed to be a "cycle" show but the only "cycles" that showed up were a small group of about five posing Harley riders in full dress.  We didn't stay long because I was hungry, tired and short of a '69 Camaro convertible pace car, there really wasn't anything there that made me want to look more than twice and that was while I was at a brisk walk.  Let's hope that the show coming up on April 8th is bigger and categorized.
Posted by Christopher T. Shields at 8:59 PM No comments: