The TA developed a small leak in the radiator and it was in one of the plastic tanks on the side so I just decided to replace the whole thing.  Advanced Auto Parts had a 25% discount online so I ordered a new radiator, bought a new thermostat and two new hoses.  I figured it would be a two, maybe three hour job.

I didn't get finished until Sunday night around sundown.

Basically, the radiator swap went well.  Some trouble getting the lower radiator hose on just because I'm under the car, on an incline, and it's a real step-bitch to get that hose on the water pump but I finally got that done.  Install everything, change out the thermostat, gasket, upper hose, start the car and ... she's leaking, no, gushing out the thermostat housing.

I take the thermostat housing off, check the seal, put it back on.

I changed the seal.

I top off the coolant that I've lost since the leaking thermostat housing and run the car all around Columbia, take the long way home, run the air conditioning and the car never gets above the thermostat rating, even with spirited driving.  The TA is actually running cooler now than it ever did before. 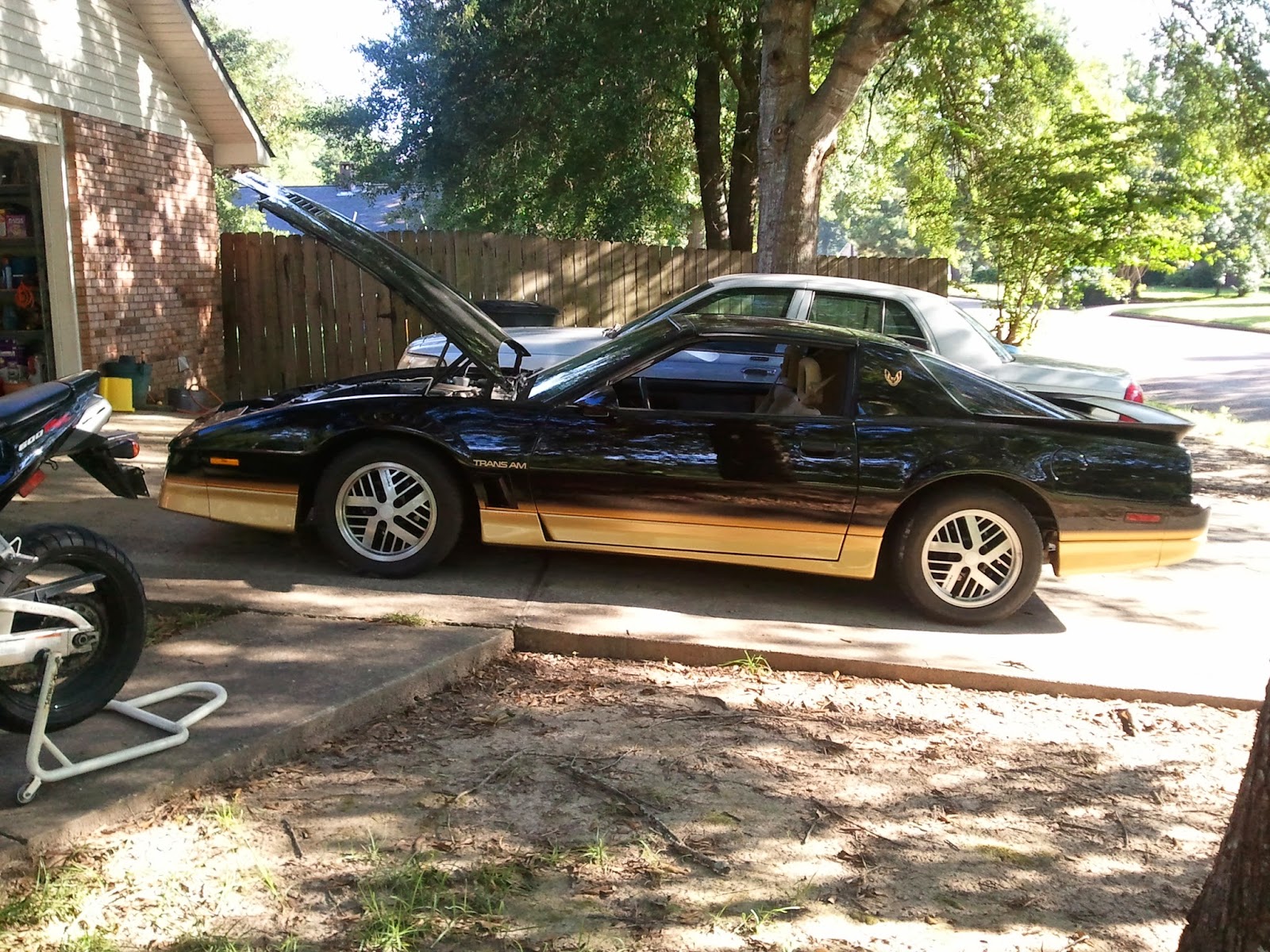 Ready for a complete coolant transplant.  The '89 Daytona is, of course, in the shop getting stuff fixed. 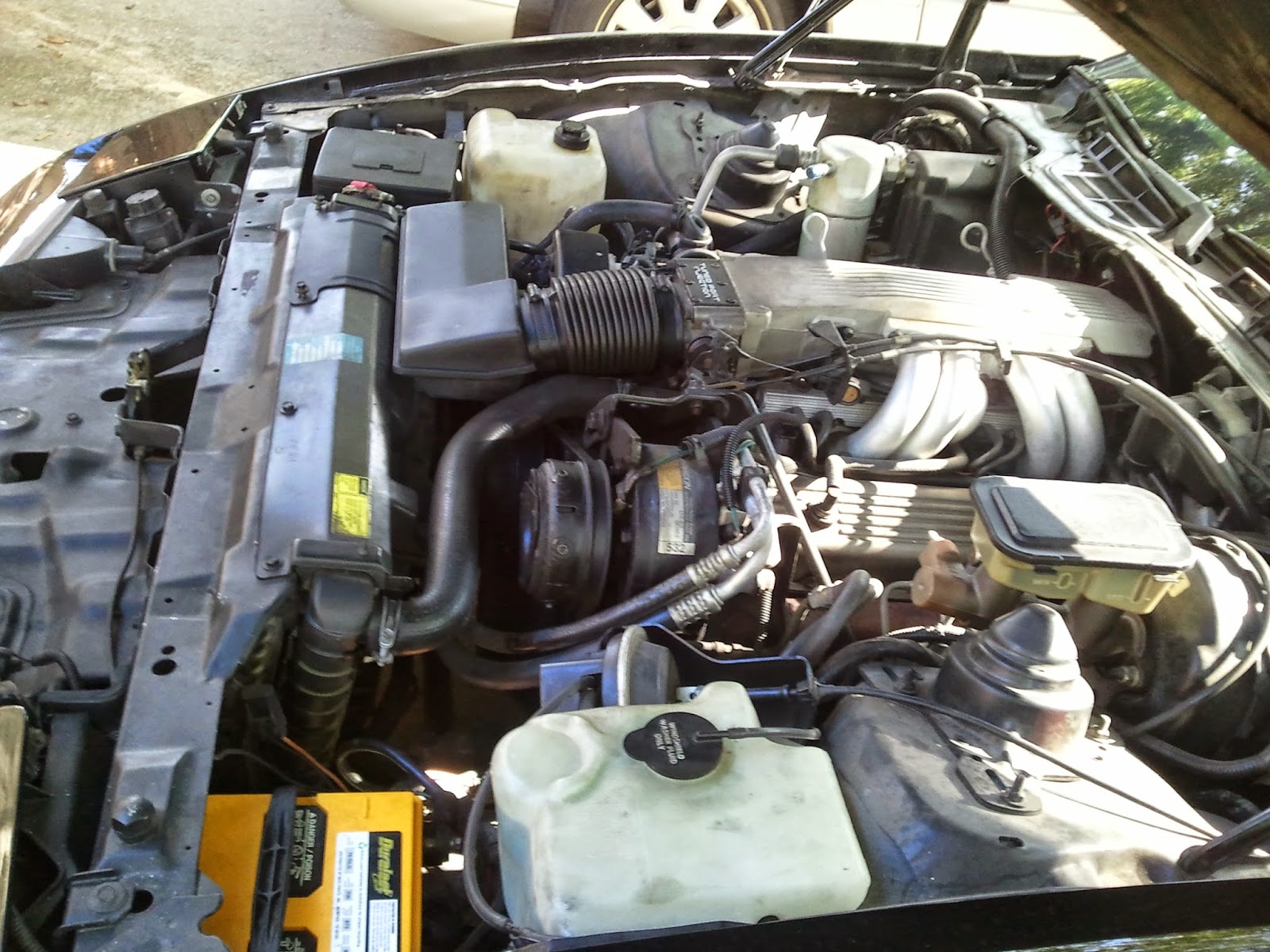 The bone stock, all original 5.0 liter LB9 TPI V8.  It needs some cleaning and detailing but ... 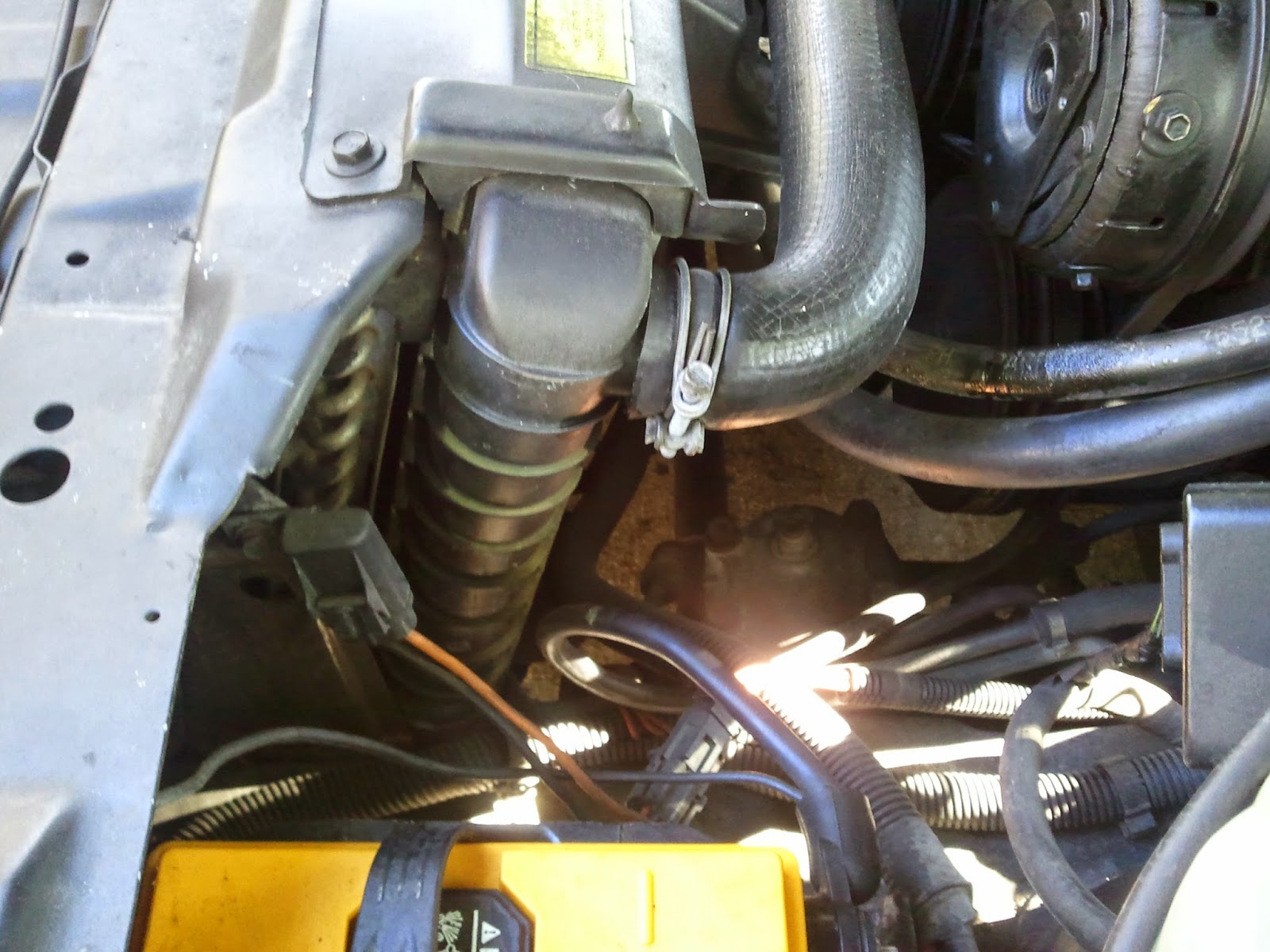 Here's where the radiator started leaking, about the third rib down from the top.  High pressure coolant was just blowing out of it.  The "gator skin" upper coolant hose is also going to get replaced.  Once the radiator is out I'll clean out the area under and around the radiator of any and all accumulated road debris. 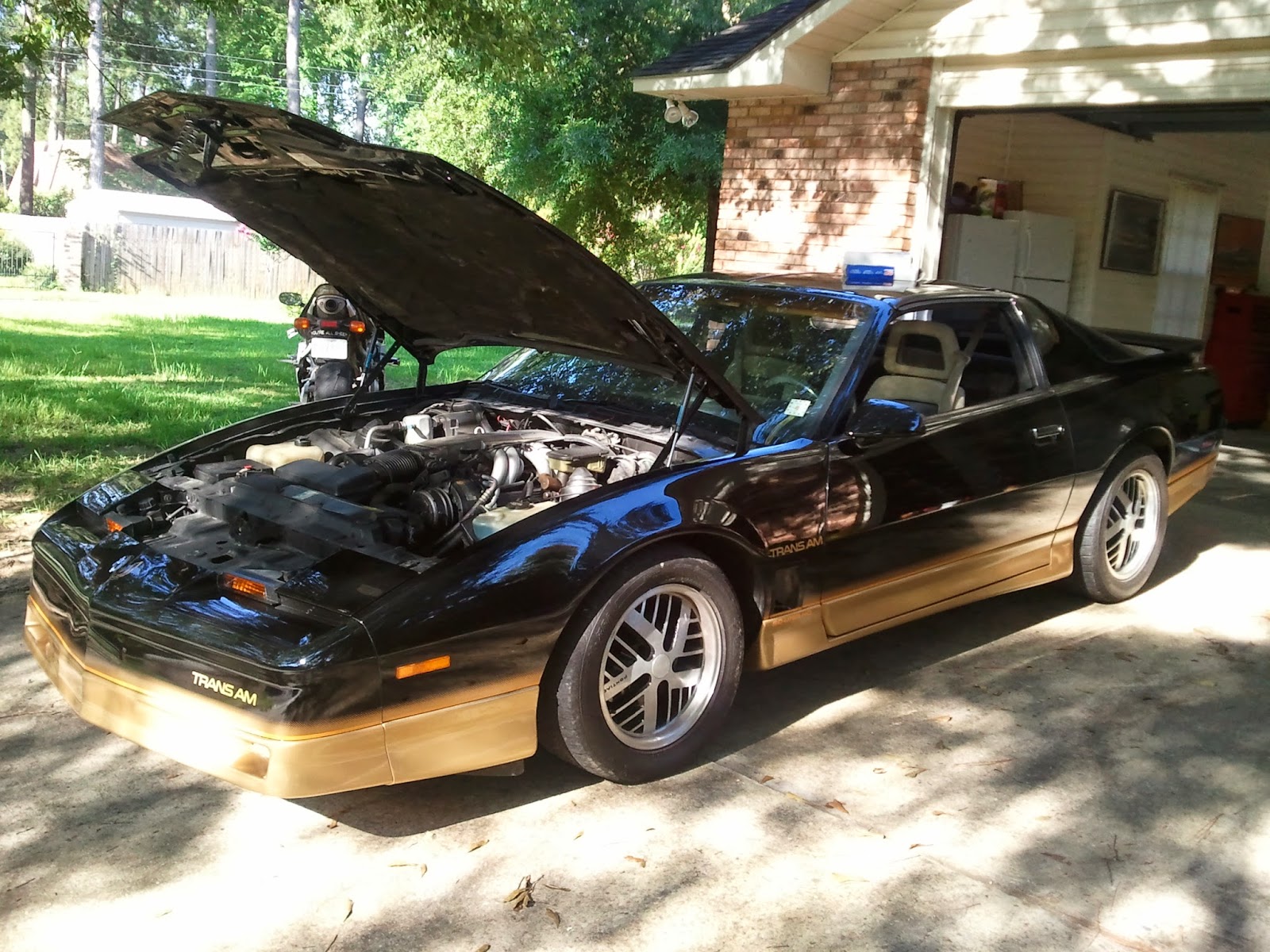 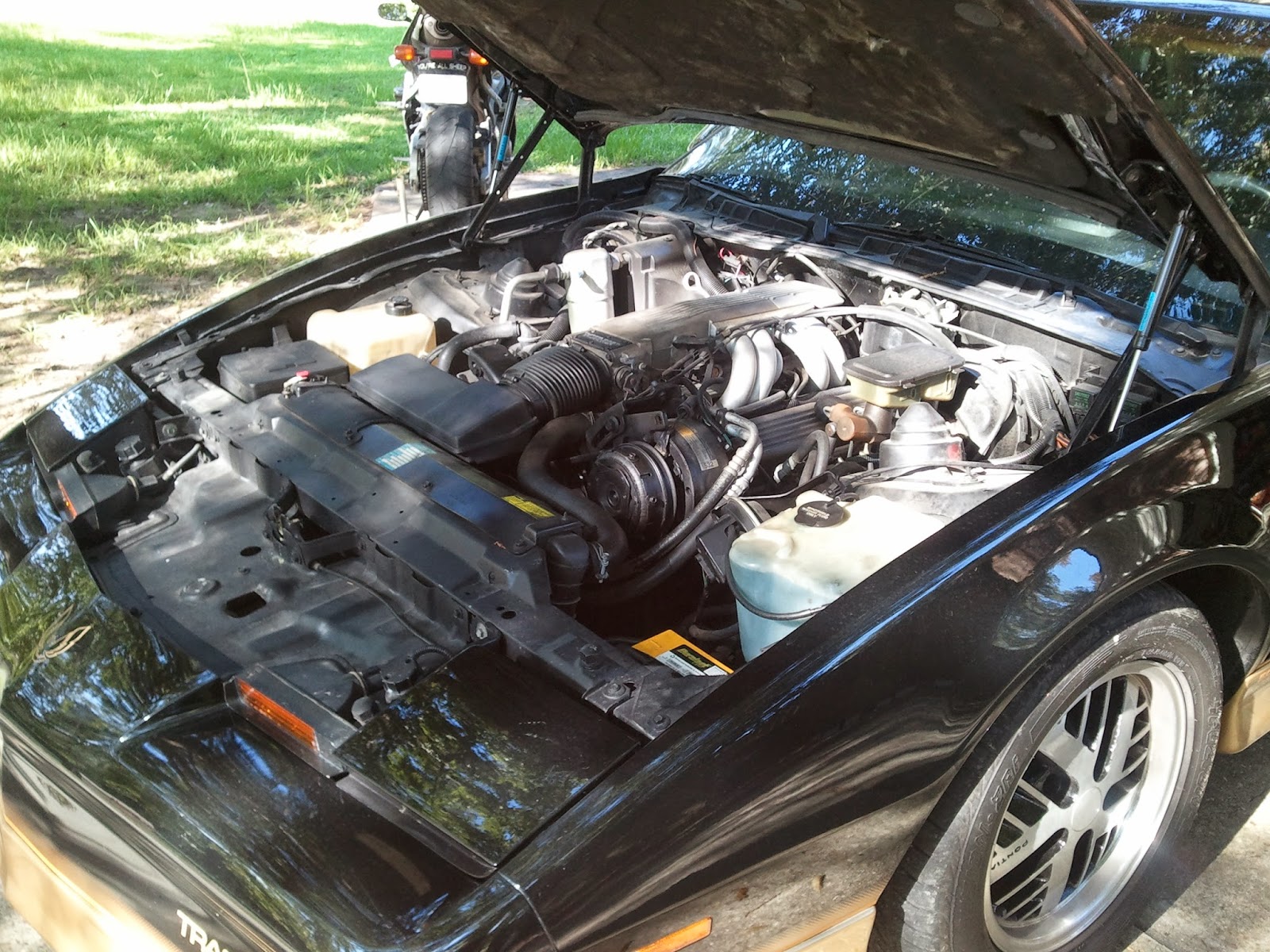 That's a lot of ... stuff ... in that engine bay.  I remember a time when you could actually see an engine in a car.  Modern cars have so much crap under the hood that the factory usually just puts panels over it to hide it all and gives you a stern warning that you aren't smart enough to touch anything under those panels so take it to the dealer and let them bend you over the fender to check your oil or change your air filter.  No thank you. 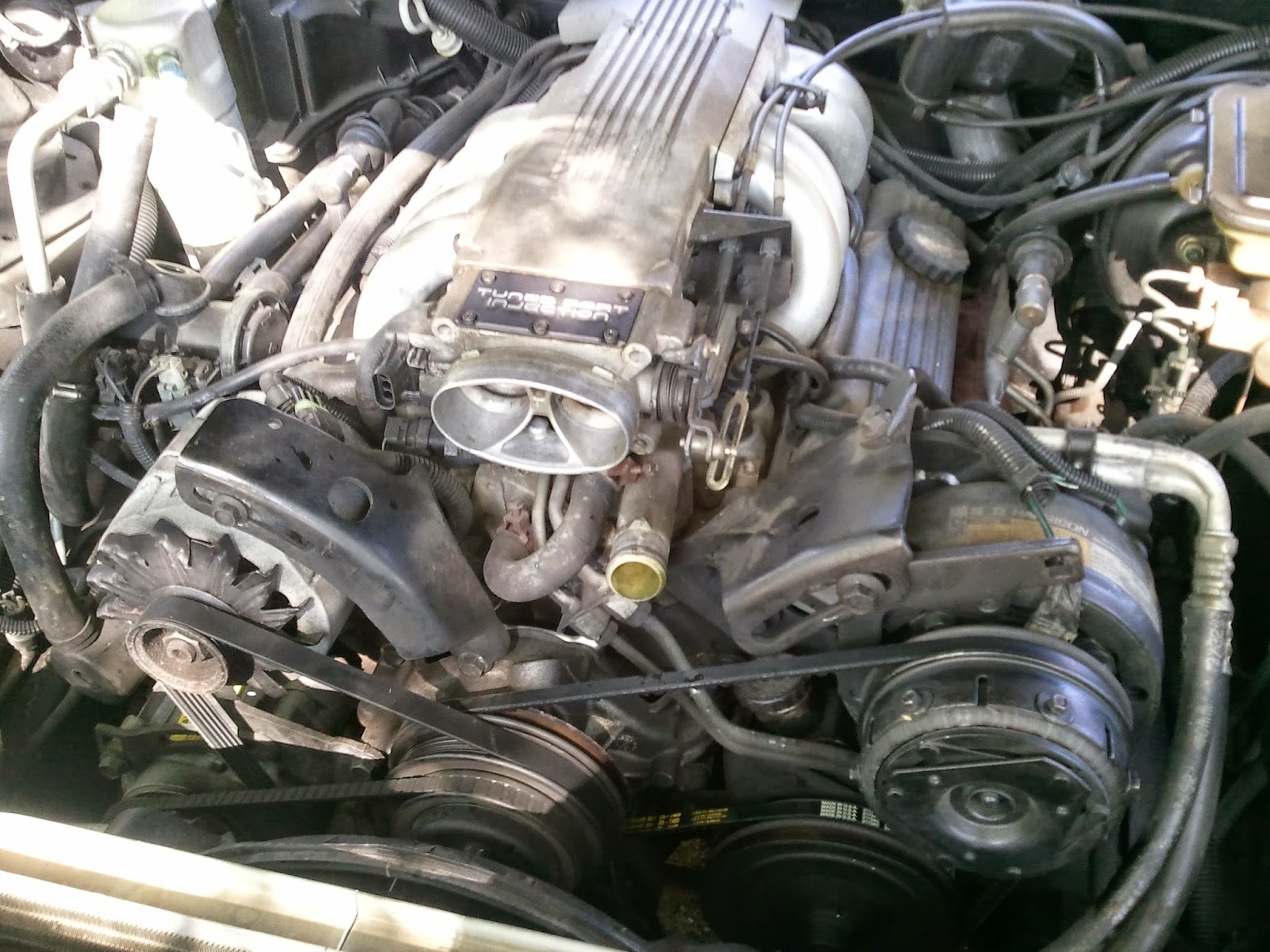 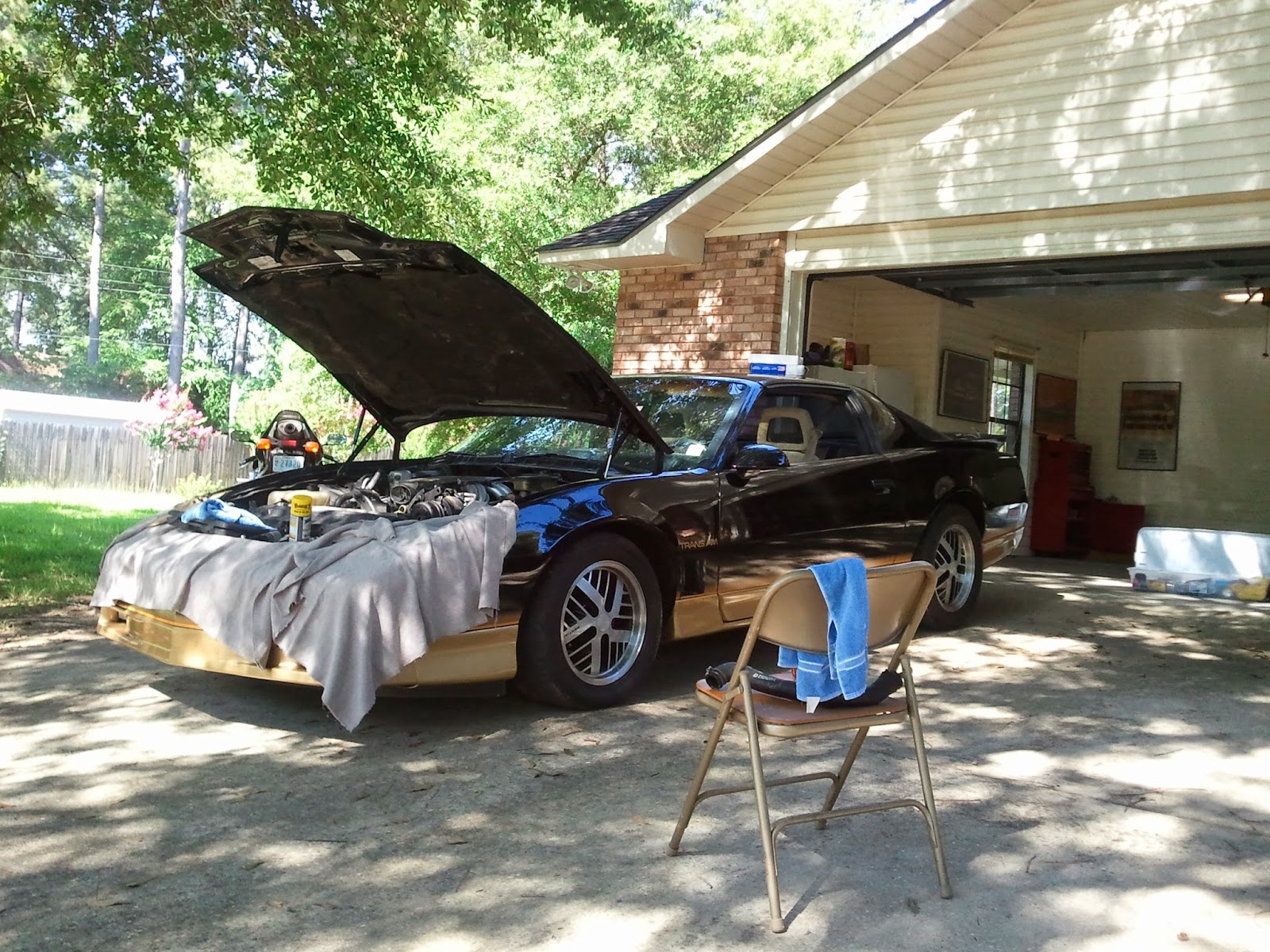 Prepped for surgery.  I thought this was going to be easy.  Murphy had other ideas. 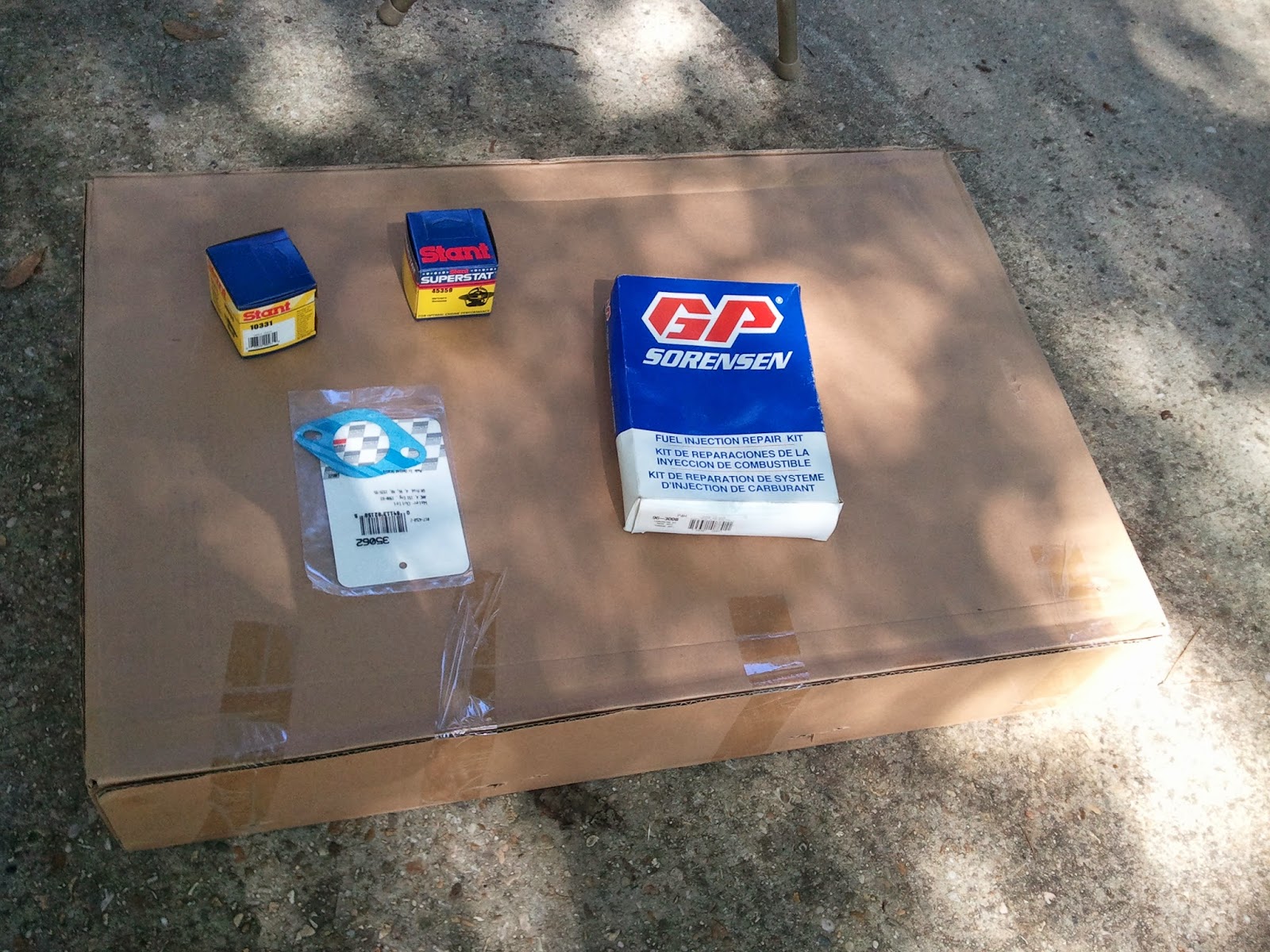 Donor parts ... new radiator, new thermostat, new thermostat gasket and a replacement kit of gaskets for the throttle body.  Might as well rebuild it while it's off the car ... 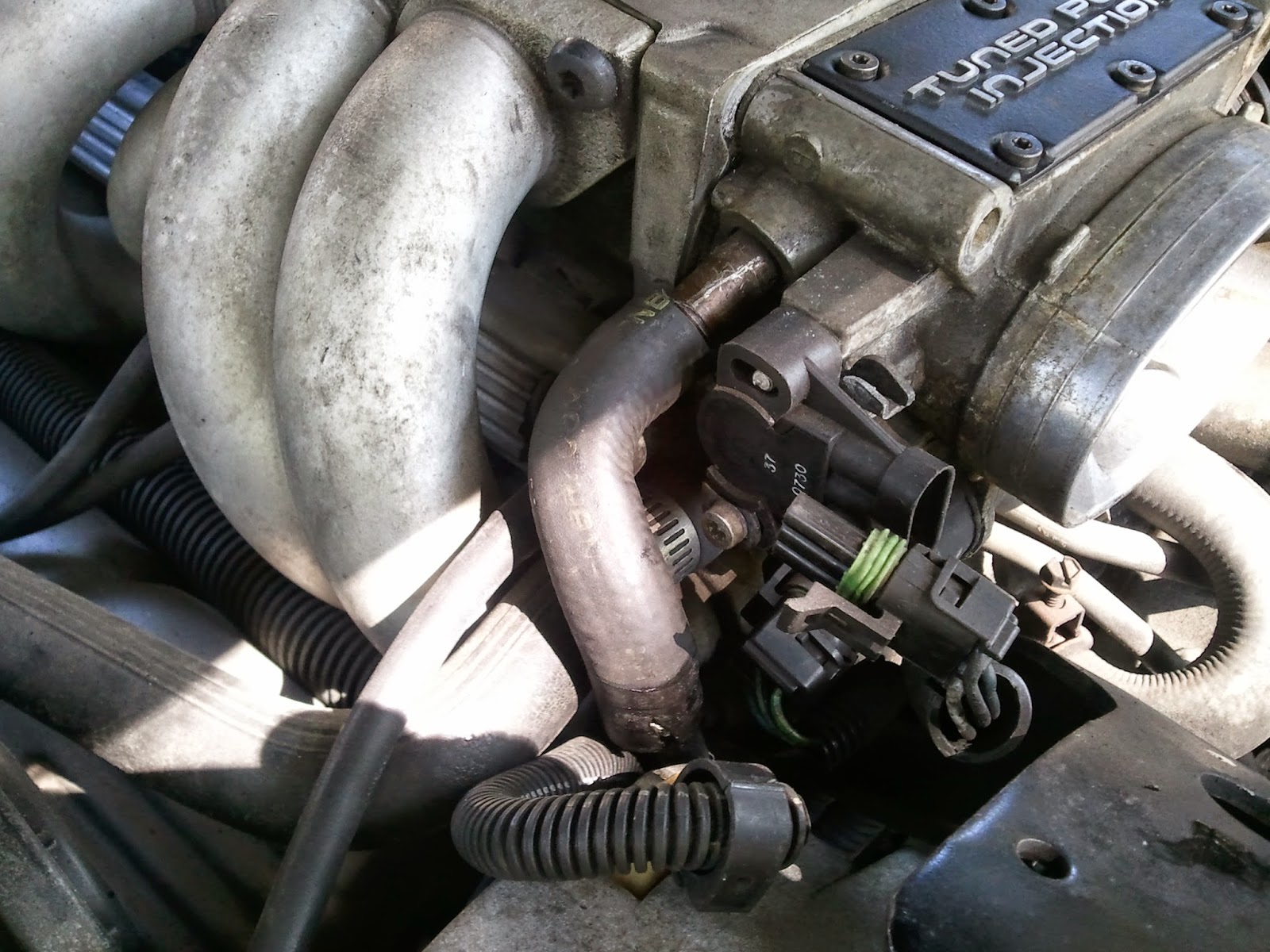 Spotted this well worn and partially torn coolant bypass hose on the throttle body.  I grabbed some spare coolant hose from my overstock and replaced it as well. 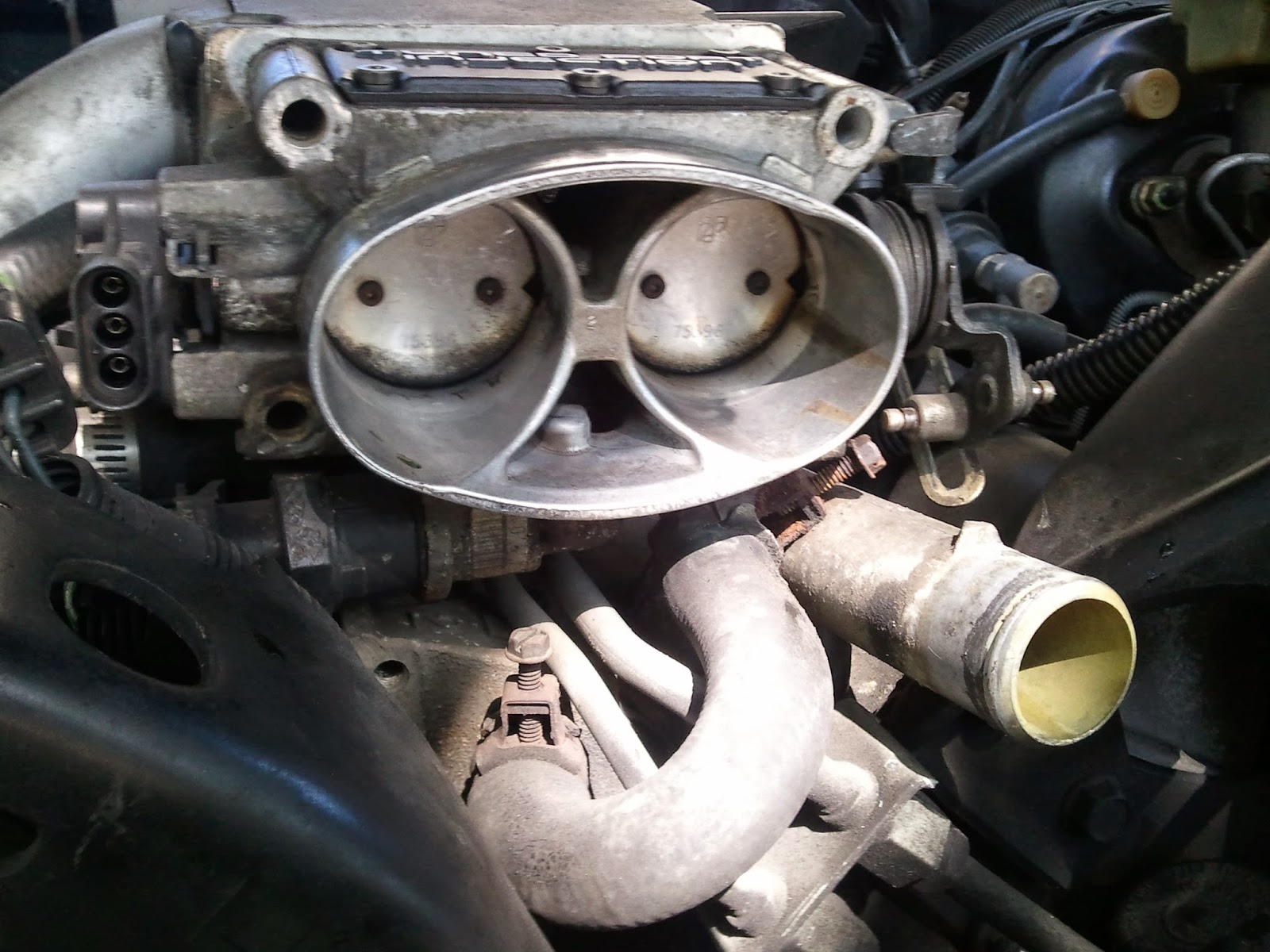 This lower coolant hose I replaced as well.  The clamps were rusted pieces of junk.  I replaced those as well.  Every hose I could find, every clamp I could throw away.  Heavy scoring on the throttle body from years of faithful service.  I tried to clean that up as much as I could as well. 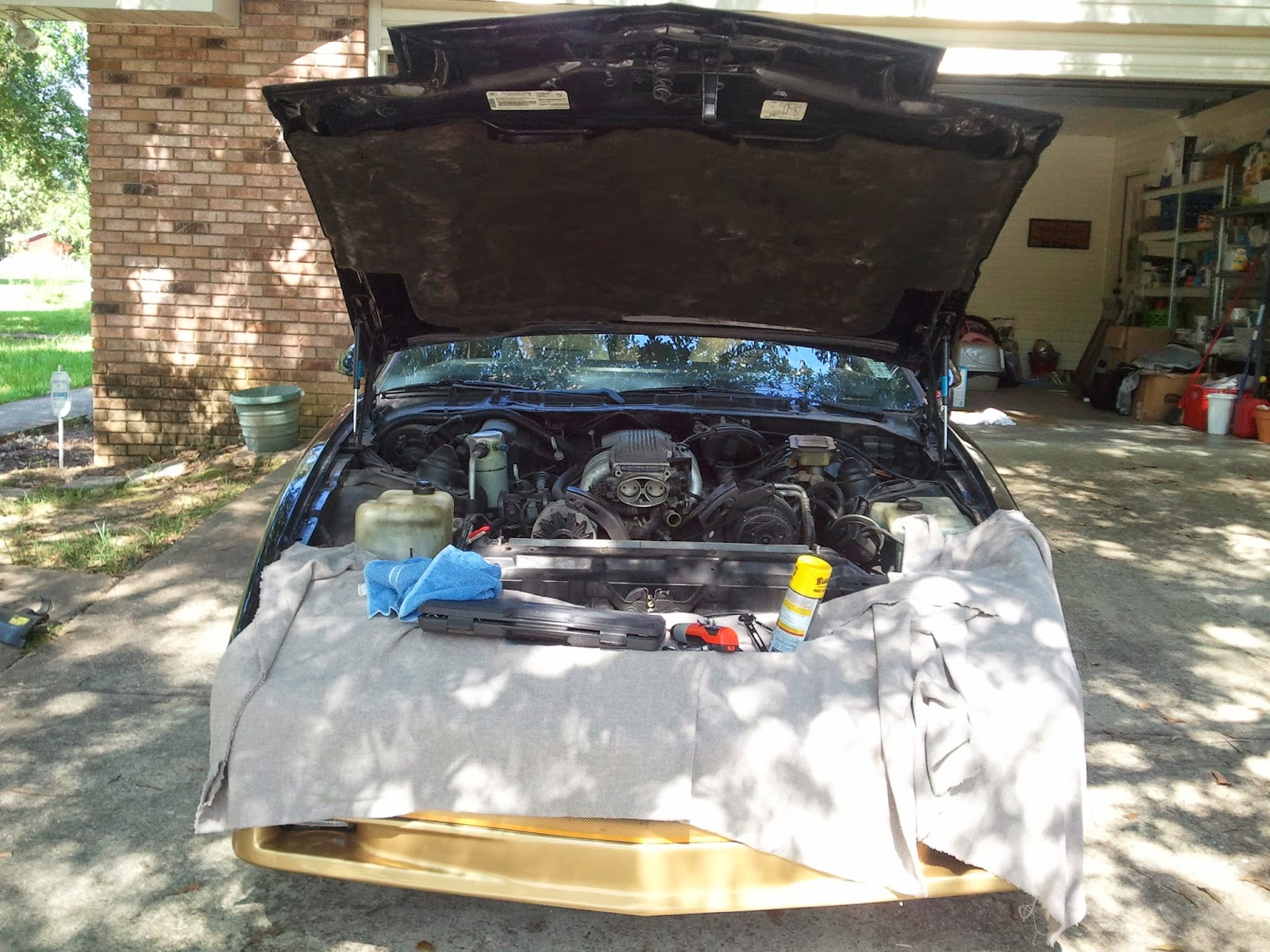 A slight break while I let some PBBlaster loosen some stuck bolts.  Spray.  Wait.  Try.  Repeat. 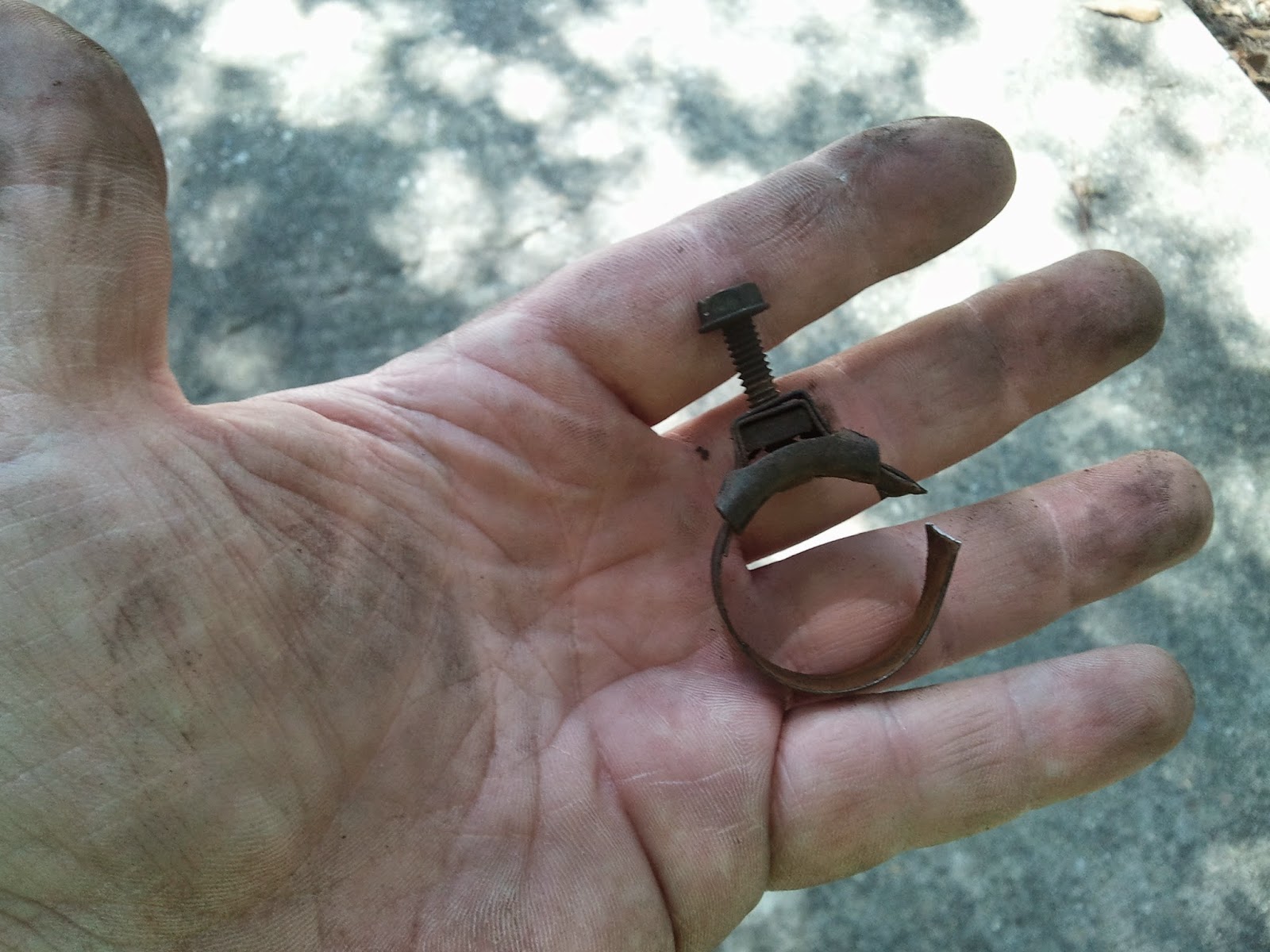 I hate these kind of clamps.  I replaced every single one that I could find with the tractor type clamps. 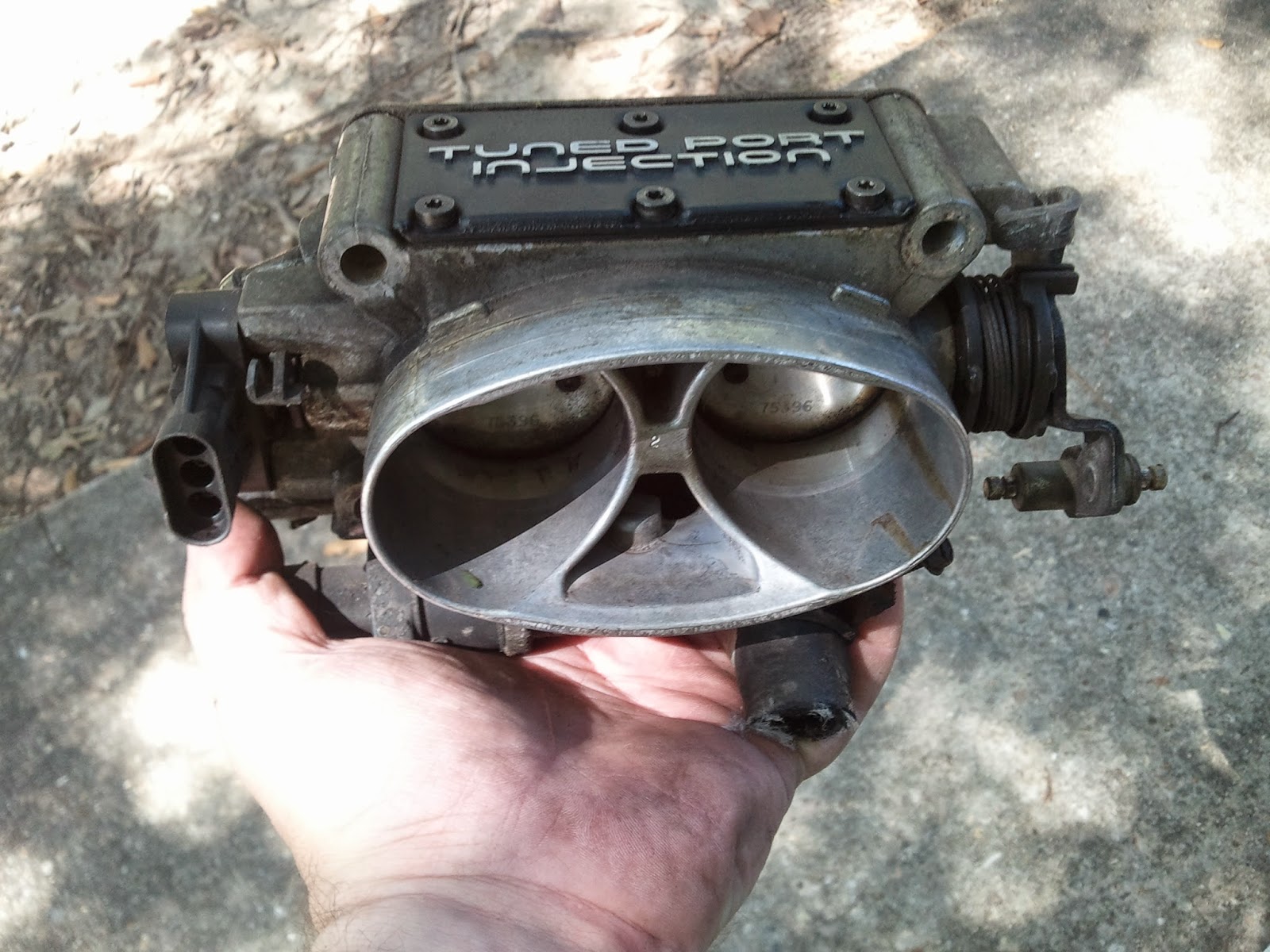 The original throttle body.  The more I got to looking at it the more I decided not to fool with it.  I've got a spare throttle body on the shelf.  I'll just rebuild that (it's a lot cleaner) and put that on the car.  I'll use this one for my TPI display unit that I'm going to mount on a nice stained wood base and put on show in my office. 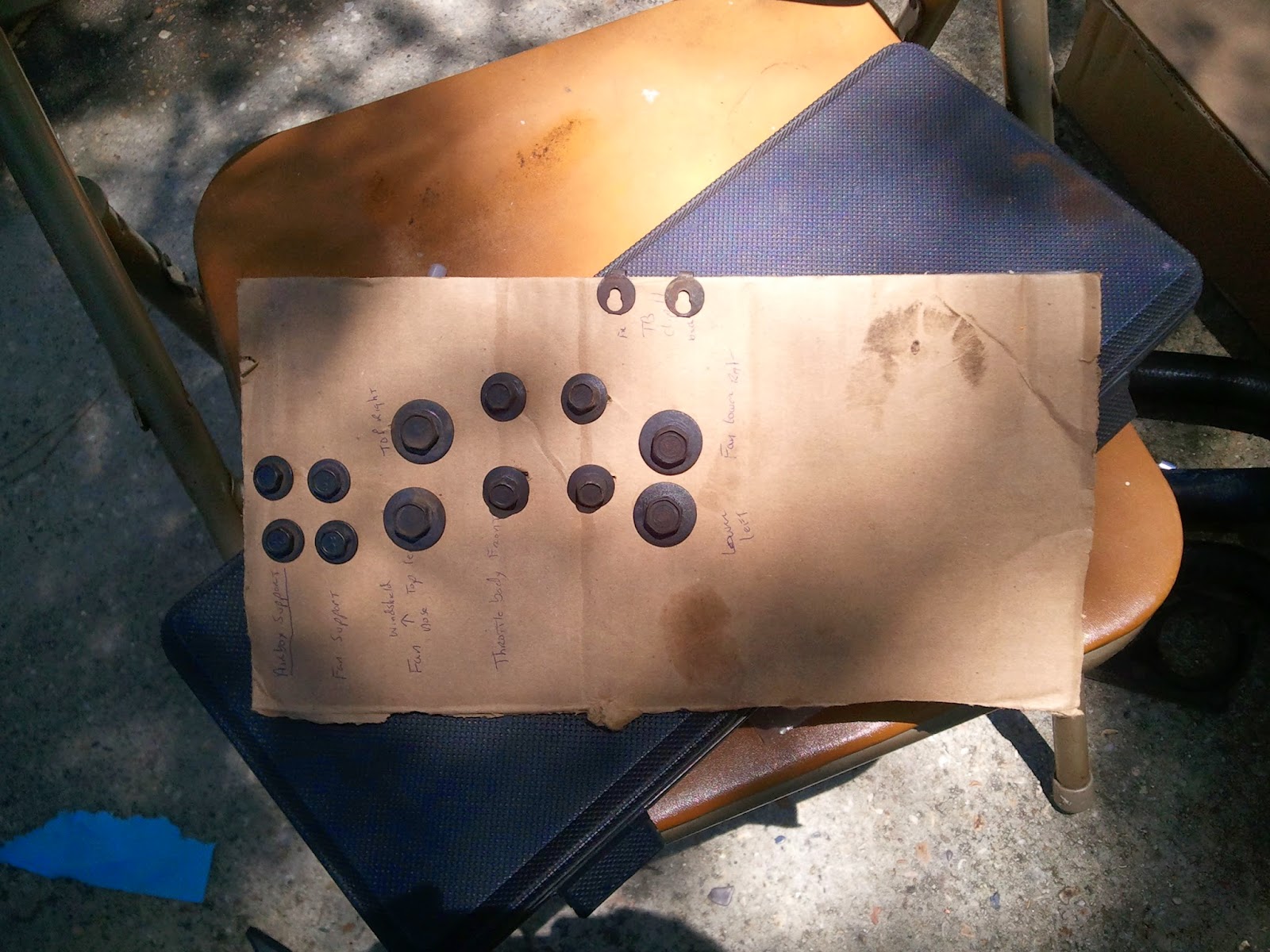 Each part labeled and sorted.  Those clips at the top are GOLD.  Don't lose them, they lock your throttle body and cruise control cables to the throttle body. 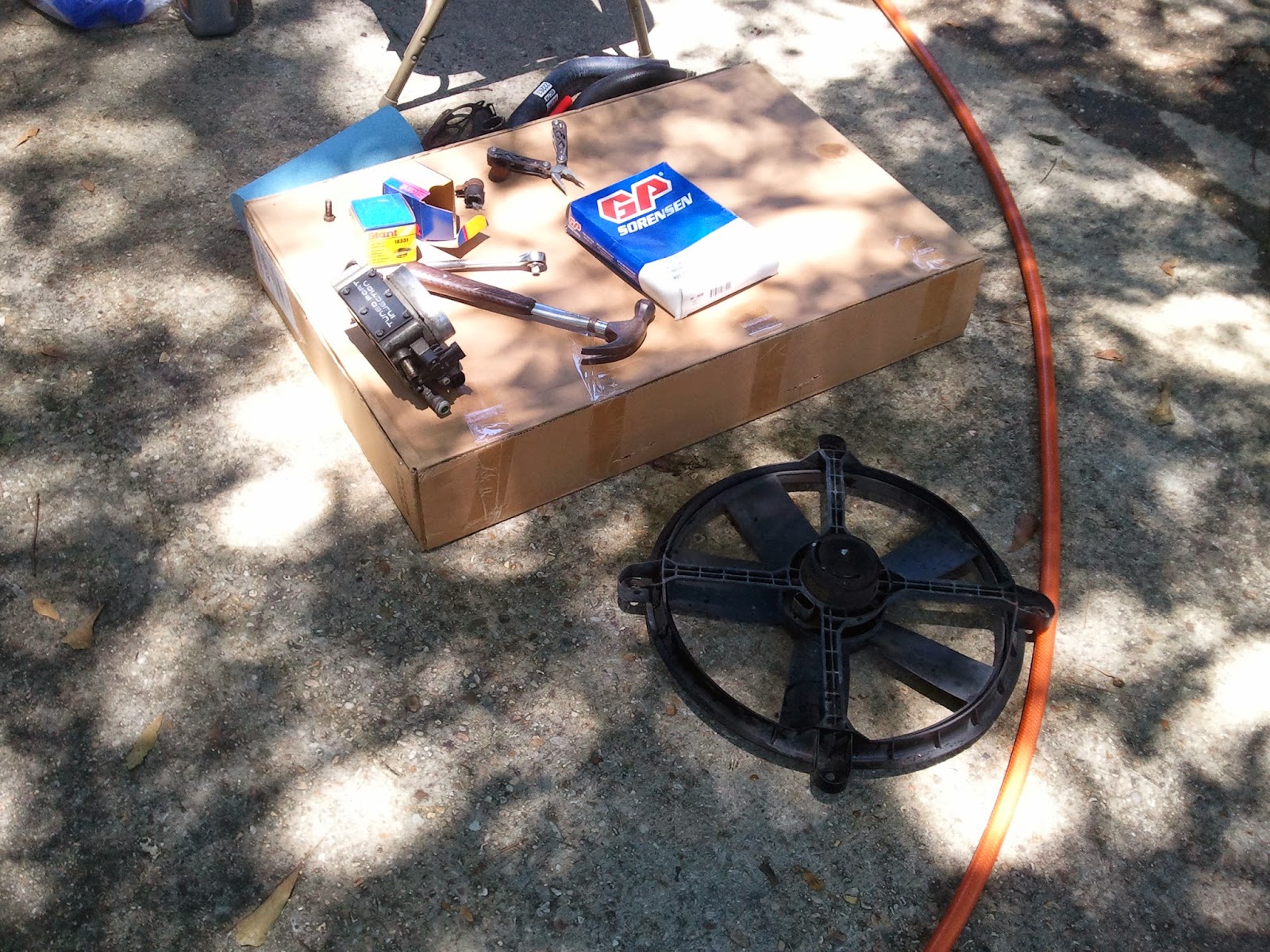 Parts starting to come off.  I thought I might just drop in my dual electric fan setup from a 1987 Formula 350 but ... not this time.  Maybe next. 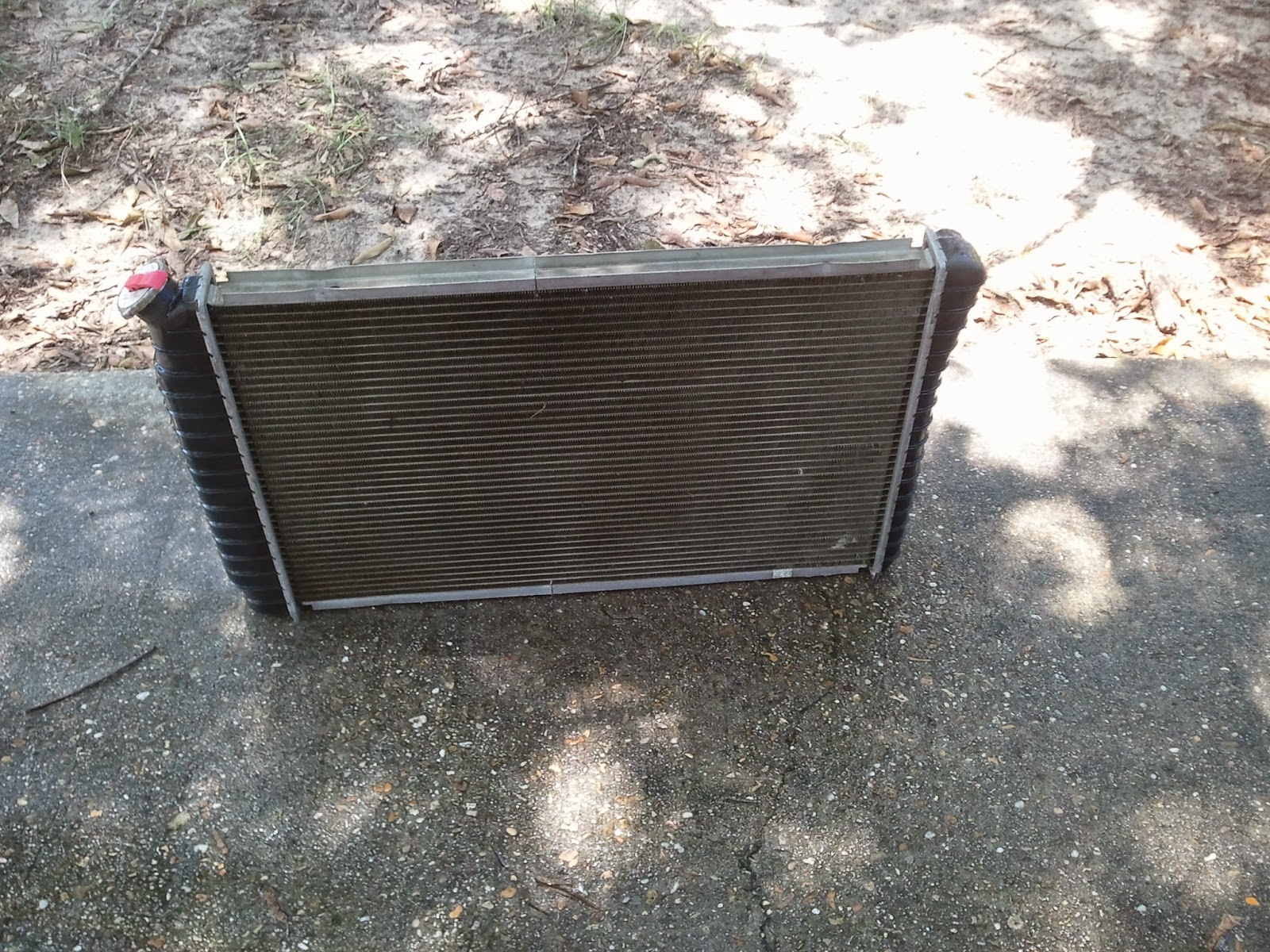 The old radiator, removed.  It's a veteran but it's not the original meaning that the radiator has already been replaced once in this car, before I ever took ownership of her. 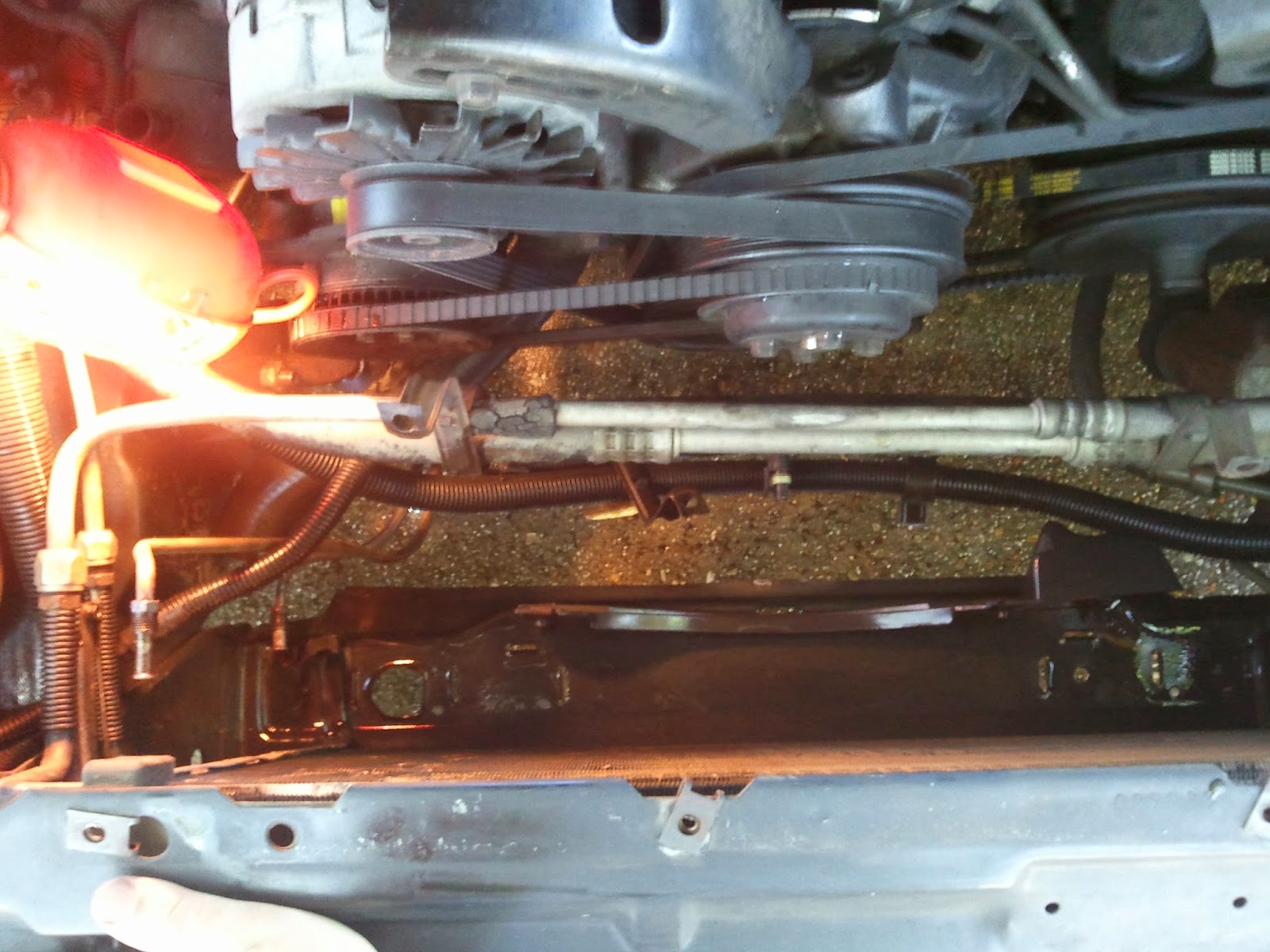 The radiator cradle, looking down.  It was surprisingly clean of debris. 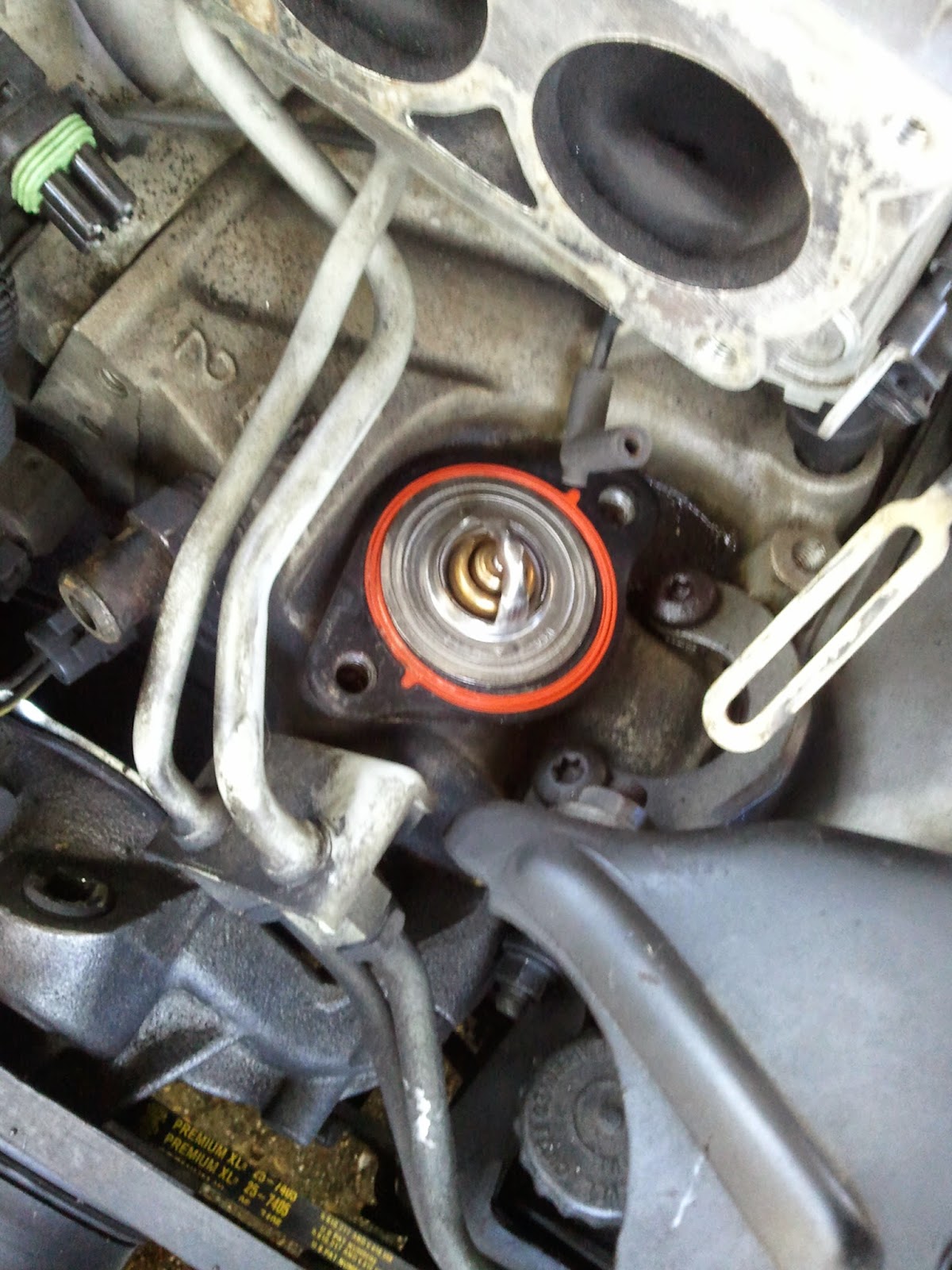 The new thermostat and permanent thermostat gasket.  That didn't work worth a damn.  $20 and it blew coolant out like a geyser.  I put on the $1.50 paper gasket and it sealed. 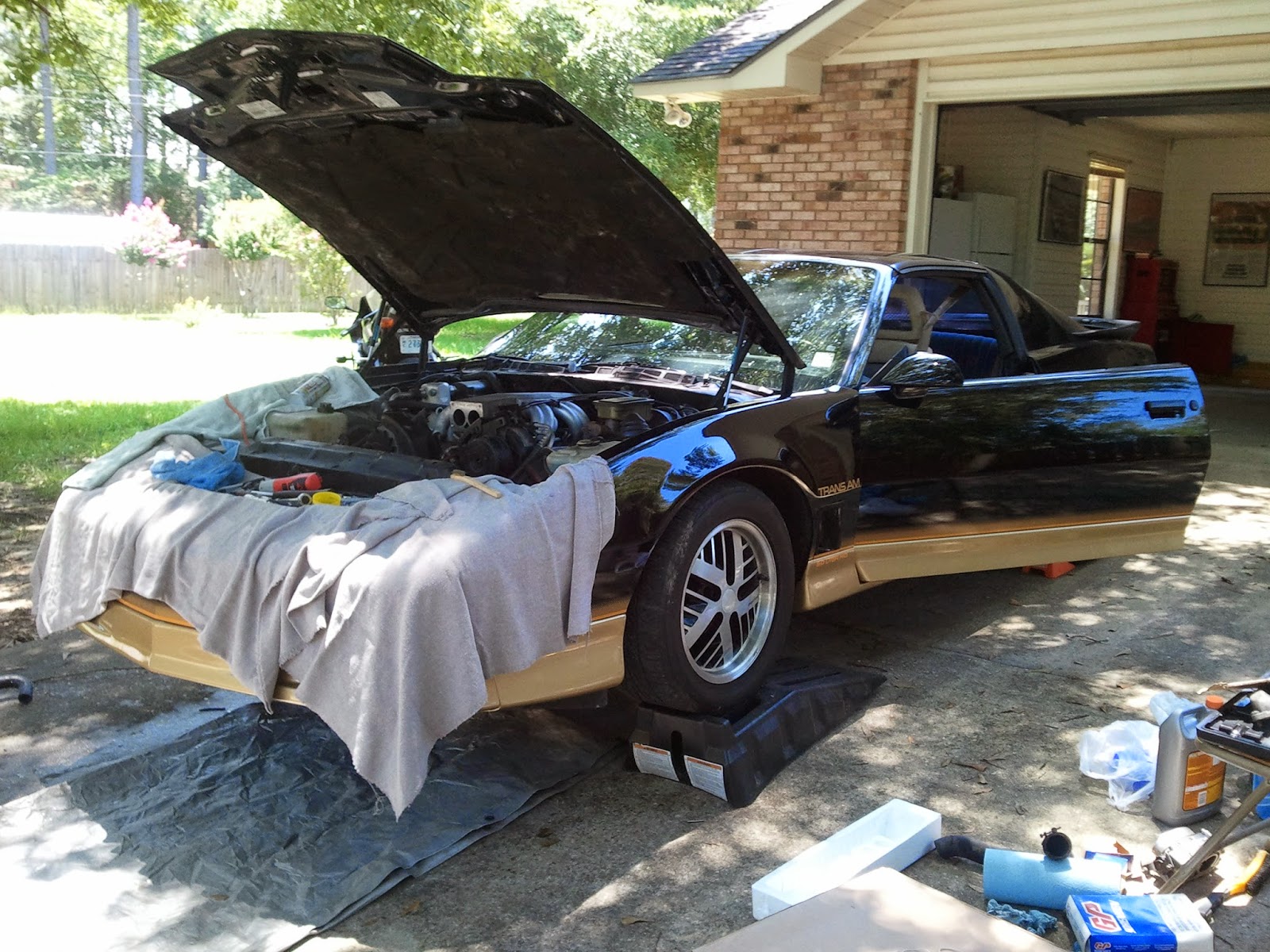 Taking a lot longer than I thought mainly because that lower radiator hose is a real step-bitch to get on.  Maybe not on a full rack but on this setup with limited leverage and limited range of movement, yeah.  That tarp is to let me slide up under the ramped TA.  Nothing, and I mean nothing, feels quite as ... icky ... as still warm coolant running down your arm, going down your back, going down your ass crack all the while you're lying there just having to deal with it and using words that would make a pastor faint while trying to get the (expletive ad infinity) lower radiator hose on. 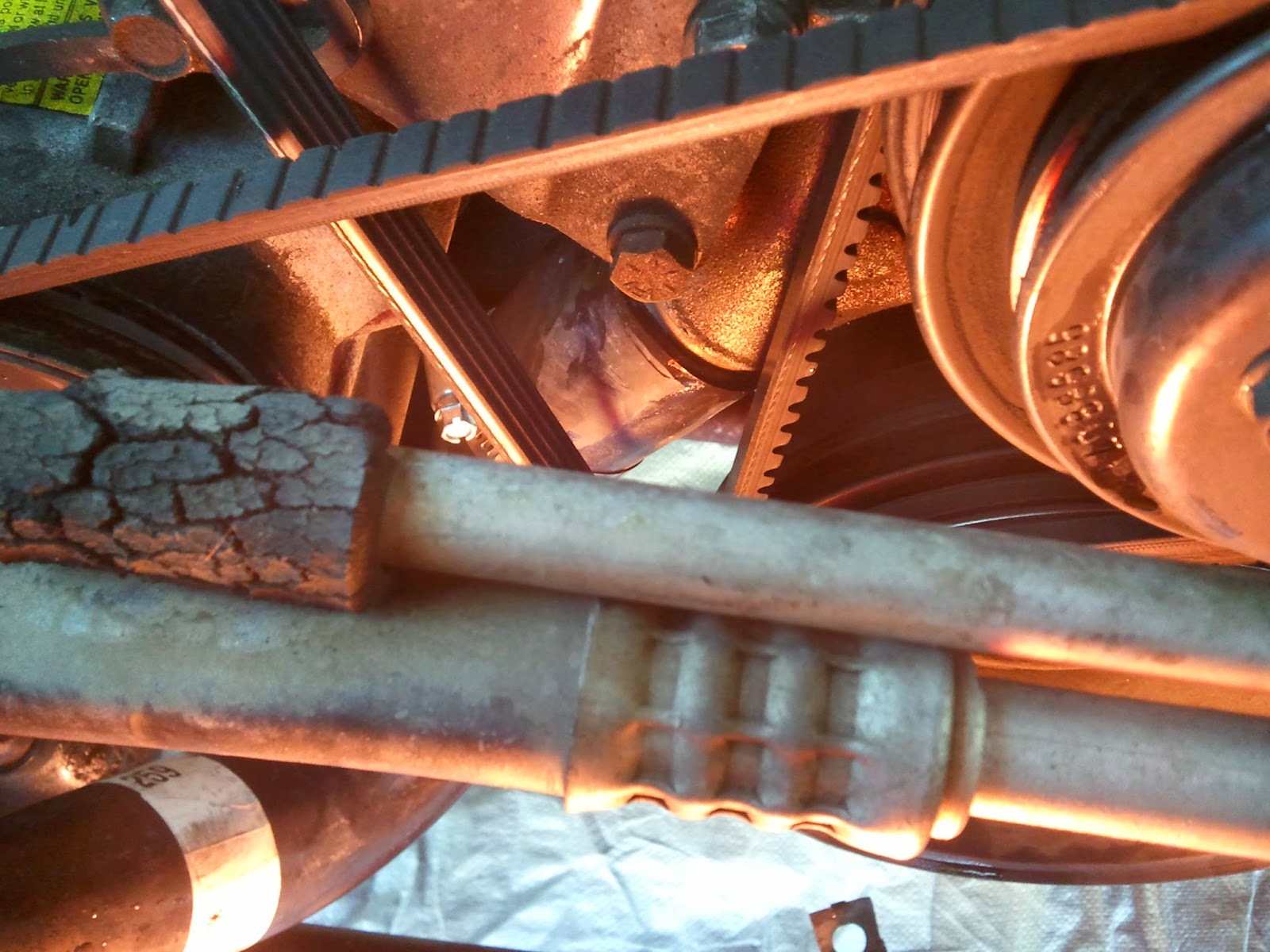